Hey Folks! We’re just back from our week long, fantastic 84 miles coast to coast walk of Hadrian’s Wall. So bear with me whilst I get a new skillet recipe I’ve created for you written up for Thursday!

In the meantime enjoy this recap and scroll through the pictures of the short weekend break we had before we went away that I introduced you to in the Quorn meatballs recipe. This was the weekend that could have turned out totally differently……. 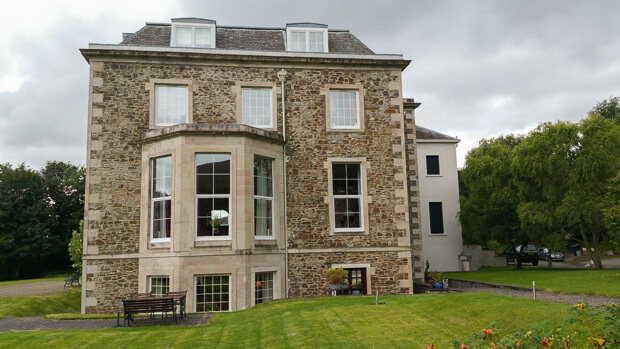 I’ll be the first to admit that I’m pretty terrible when it comes to plans falling through.

I think that’s because I’m a Project Manager by day and used to making plans and having them more or less stuck to by the teams of people that I work with.

However, I really should learn to adapt more and also be thankful when plans fall through and the alternative plan actually works out better than the original one!

Take this weekend in question for example. The last weekend in August when we had planned to go to the Strathspey Mountain Hostel in Newtonmore only to have it cancelled 3 days prior to leaving due to being told the owner had mistakenly double booked us.

After frantically searching high and low on a weekend where there was an English Bank Holiday on the Monday, and a further disappointment of other accommodation falling through in Fort William, we eventually ended up here at Broadmeadows House.

Broadmeadows House is situated near Selkirk in the Scottish Borders in the Yarrow Valley.

We managed to get booked into their west lawn apartment for the Friday and Saturday night.

Described as “a secluded hideaway for a couple” it was exactly that – and more! A perfect base for exploring an area which we had never been to before and noting many walks that we could come back and do in the future, using Broadmeadows House as a base. 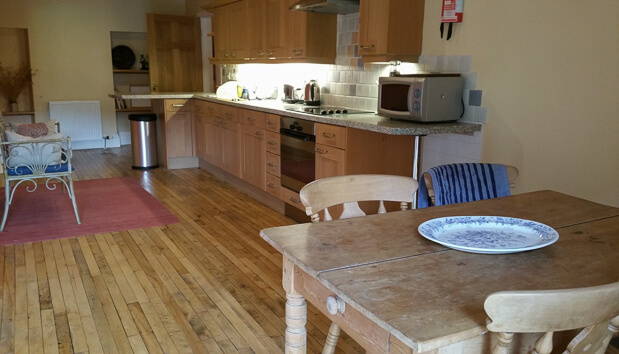 For a foodie couple, Lady Lynne and I loved the ample space and facilities available in the kitchen (shown above).

Not only that the apartment was  huge! Plenty of space for two, and with a huge garden around it. What a great feeling of not feeling claustrophobic as you sometimes can in our home city of Glasgow.

All home comforts are provided here. Lady Lynne was delighted that she lost no Facebook down time with an adequate WiFi available. 😉

Plus there were lots of maps and suggested walks of the area available which meant we could plan what walk to do when we arrived without having to buy the maps in advance. Which is exactly what we did with the circular walk that I’ve written about below. 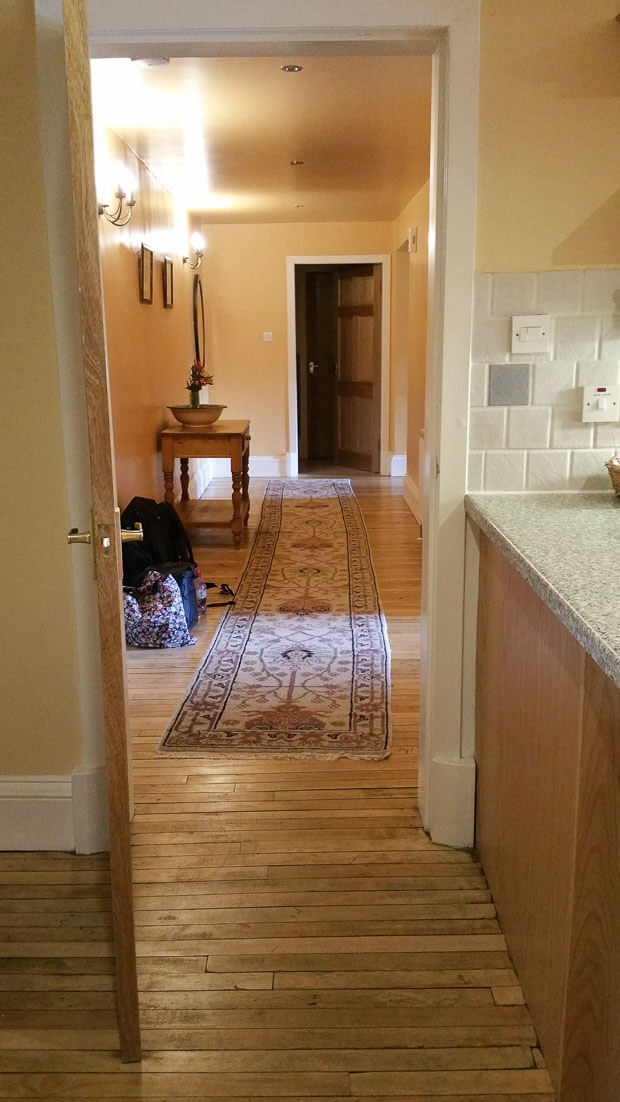 At the end of the long corridor above was a huge bathroom with an amazing power shower which would soon wash away all the aches and pains from the walk too.

Formerly the servants hall and butler’s accommodation, the whole apartment still retains the original proportions of a large house despite being on the ground floor.

It’s great that when the house fell into disrepair in the 1980’s someone was able to buy it and renovate it for modern use but not completely ruin it’s original grandeur. 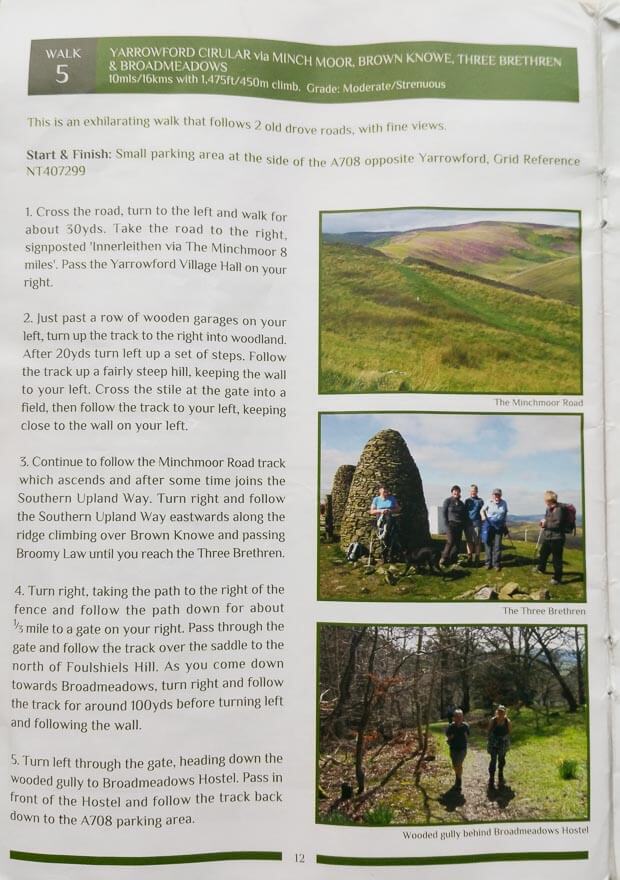 The Yarrowford Circular via Minch Moore, Brown Knowe, Three Brethren & Broadmeadows walk was detailed as above within one of the walking books in the apartment bookcase and was also recommended to us by Dianne, our host.

A perfect 10 miles walk with stunning views, amazing scenery and peace and tranquility, exactly what we were after. Particularly myself, as I needed to clear the clutter out of my head from the previous 5 weeks of 12 hours per day project work! 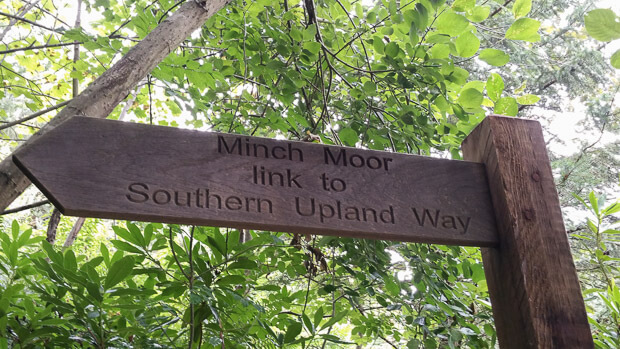 What was also excellent about the walk was that it started in the village of Yarrowford. The village is literally a 5 minute walk down the driveway of Broadmeadows house then a right turn and a short few metres along the main road.

This meant my car wasn’t required to take us to a particular starting point for the walk. Again, with no driving involved it was a win win situation!

Once you’ve walked past the village hall, the walk starts at the back of the village and is clearly signposted, with an easy well trodden stone path to follow on it too. 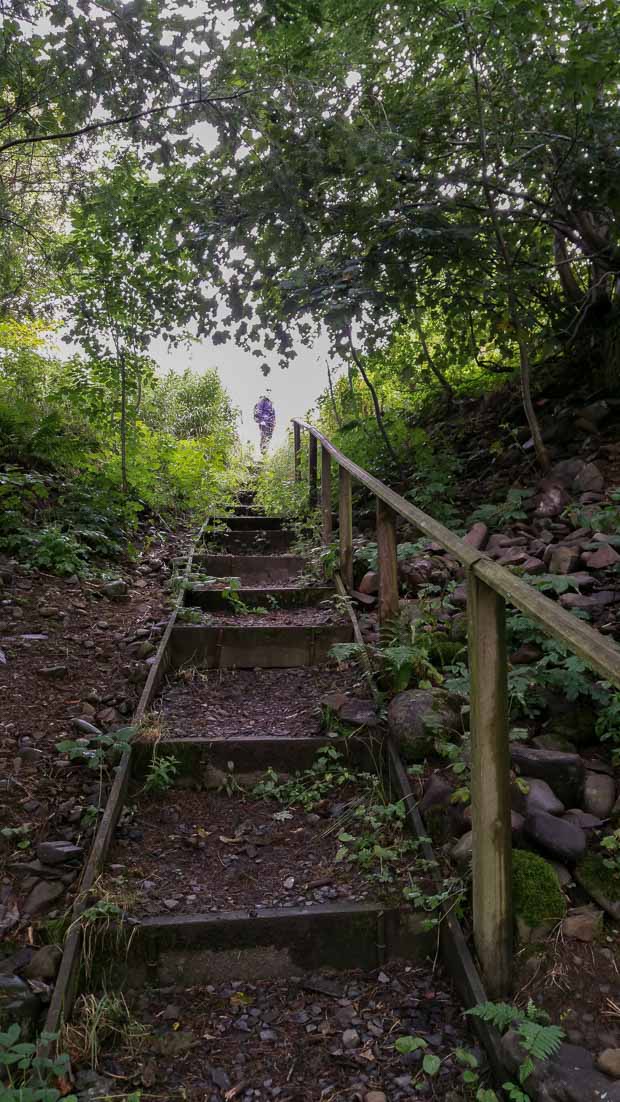 The steps lead up through the trees and this really is the steepest part of the initial climb before a bit of an incline to reach the Three Brethven later on.

When we had traveled down from Glasgow the day before (Friday) there had been heavy showers of rain. Although the grass was slightly wet underfoot we didn’t have to face any bogs to walk through during the whole day, so that was lucky. 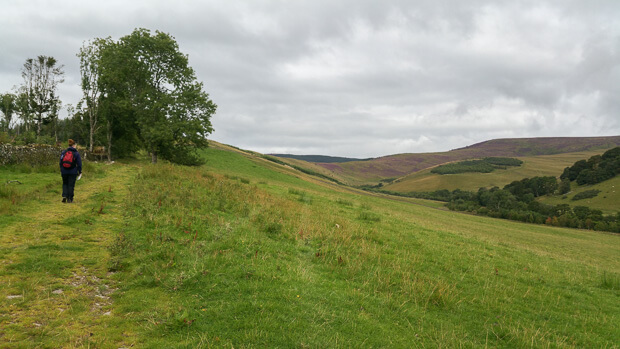 Once through the short tree walk and out into the open again the whole expanse of the Scottish Borders begins to open up for us.

Here, walking on the historic Minchmoor Road, which was at one time the main route across southern Scotland, spectacular views of the area made up of mainly woodlands, farmland and moorland are viewed. Land that has changed little in over 800 years. 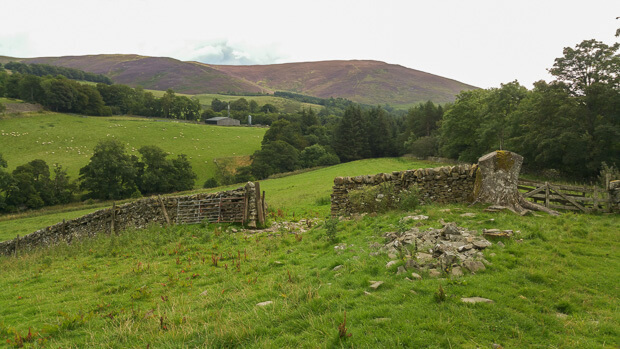 Sheep farming is the mainstay of the area along with some forestry and tourism.

The borders economy was said to have been made by sheep and today they outnumber humans eleven to one. Sheep have been grazing on these Border hills since at least the 12th century, yielding wool, milk and meat. 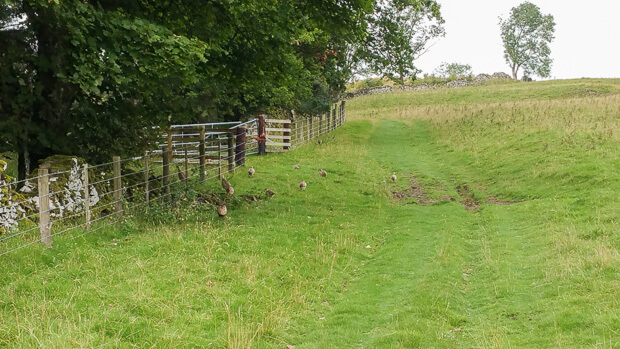 There’s not only an abundance of sheep though!

Whilst progressing up Minchmoor Road every step we made seemed to disturb red and black grouse from hiding in the heath.

And the purple heather that Scotland is so famous for was distinctly noticeable.

It’s at this point that Lady Lynne bursts into song with “The Wild Mountain Thyme” :-

O the summer time has come
And the trees are sweetly bloomin’
And the wild mountain thyme
Grows around the bloomin’ heather
Will ye go
lassie
go?

And we’ll all go together
To pull wild mountain thyme
All around the bloomin’ heather
Will ye go
lassie
go?

It might sound romantic, but Lynne sings in “Beyonce style” and I’ve yet to hear Beyonce do a version of this classic folk song. 😆 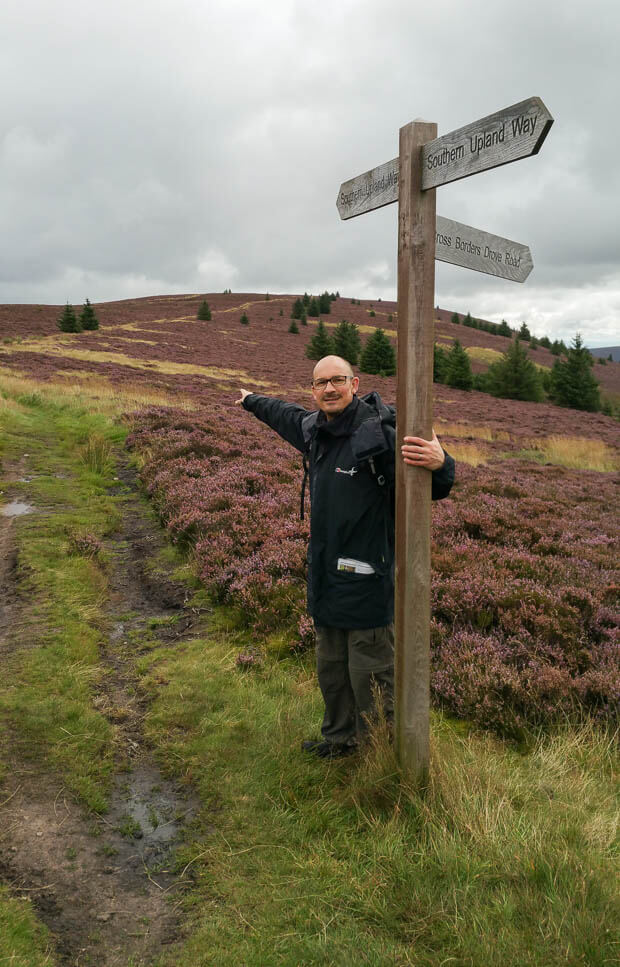 At the top of Minchmoore Road we reach the Southern Upland Way. This is a 212 mile coast to coast walk between Portpatrick in the west of Scotland and Cockburnspath in the east. #onthebucketlist

Here, at the signpost, we take roughly a 4 mile walk along the Southern Upland Way heading westwards towards the Three Brethren. 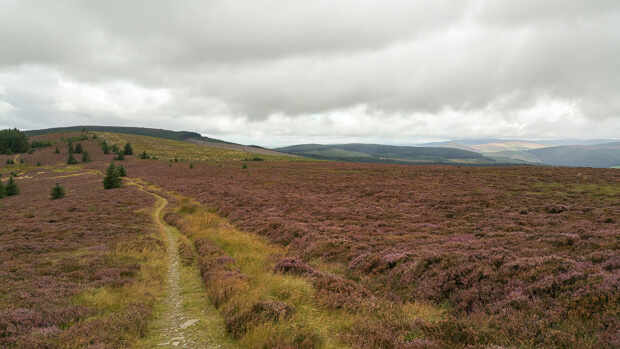 It’s a lovely walk along the way. We had a few rain showers during the walk but nothing that ruined our fun or changed the mood. Fresh air in abundance and stunning scenery to go with it.

Of the people we met along the trek, most were day hikers like ourselves or joggers running part of the way. We never saw anyone with large rucksacks, then again I never asked anyone if they were doing the whole distance as this is one of those walks, like the Hadrian’s Wall walk where you can get your main rucksack transported from accommodation to accommodation whilst you are free to walk with just a day sack. 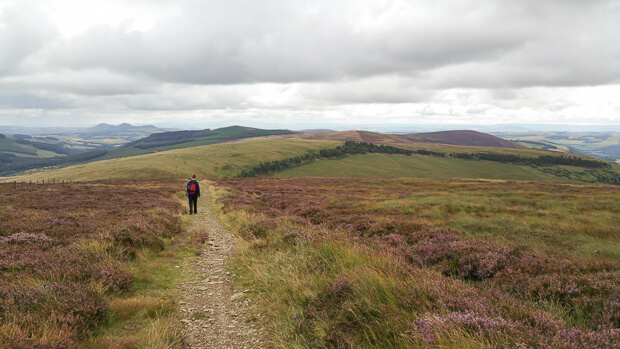 In the distance above, Lynne is walking towards Browne Knowe which is the highest point. 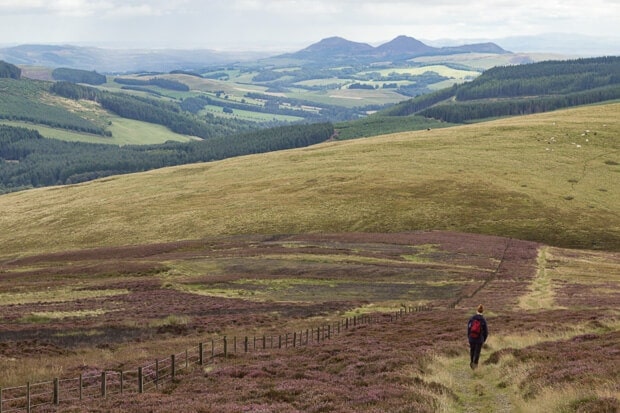 Then when we begin our descent from Brown Knowe, the Eildon Hills near Melrose come into view.

There is a descent of roughly a mile here so I’m glad we did the walk from this way round! 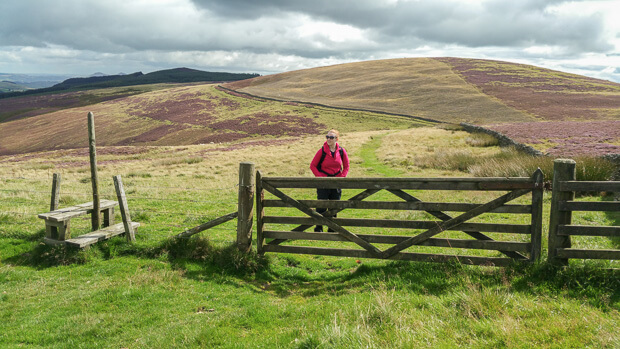 In between the rain showers we had bursts of sunshine.

Whilst the sunshine is also very welcome, it also meant we spent the entire walk changing from wearing waterproof jackets one minute to t-shirts the next! 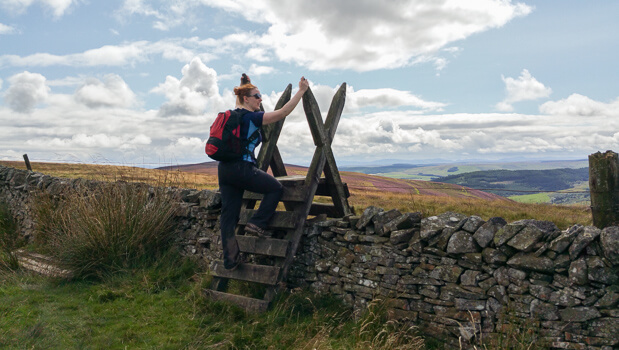 This stile wasn’t actually on the Southern Upland Way itself. It was one that led to the many numerous paths in the area.

With sheep being in abundance and free to roam anywhere in this area a lot of the paths are actually tracks made by the sheep. It’s best to stick to the main paths so as not to find yourself roaming about some hillside wondering which way to go! 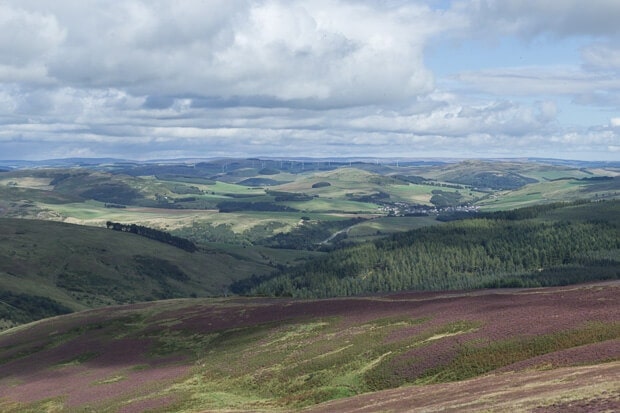 After the descent, once again we start climbing here going round the north side of Broomy Law on a wide path. It’s a gently climb though!

The village that can be seen in the distance is the village of Clovenfords.

The Southern Uplands Way is also suitable in part for mountain biking too.

I haven’t been on a bike for years but due to the many Tyre tracks on the path you could tell this is also a popular cycle route as well as a walking route. 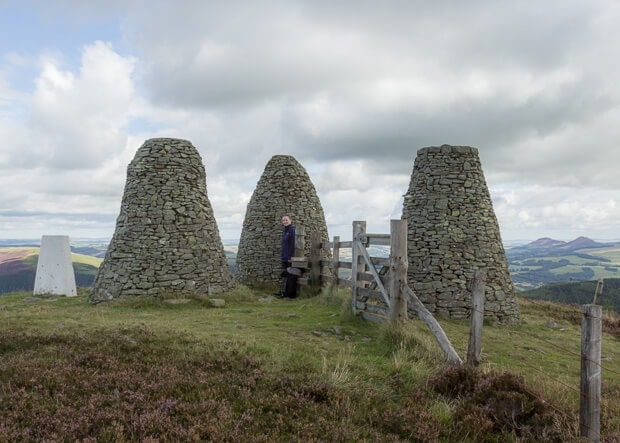 Finally we reached the Three Brethren.

The Three Brethren are a trio of massive, solidly built cairns dating back to the sixteenth century; their position means that they are a popular point to am for and they’re also splendid viewpoint.

The cairns stand at 3 metres high and were built in the 1500s to mark the meeting of the estate lands belonging to the lairds of Selkirk, Philliphaugh and Yair. 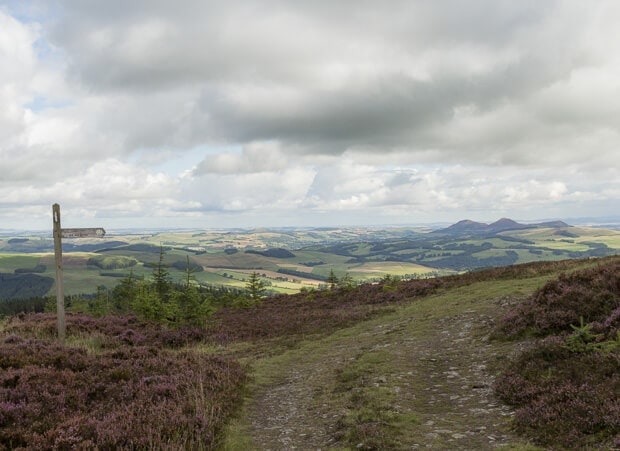 The signpost you can see is pointing to Galashiels, a 10 mile walk away.

Perhaps for another day? 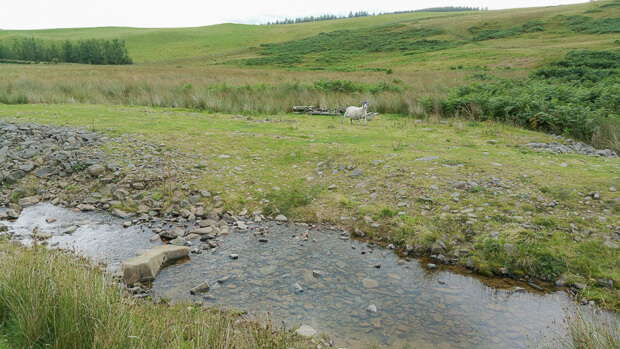 OK, so I have a confession to make at this point because I totally misread the directions (even though they were pretty clear) and I made us walk an extra 4 miles that we actually had to.

The directions in the book pictured further up clearly state “follow the track over the saddle to the north of Foulshiels Hill”.

Well in my head I thought we were going to go over the saddle to the south of Foulshiels Hill and I made us walk all the way down to the bottom. Here there was no route back over to Broadmeadows House. Do you think that sheep knew I’d made a mistake? 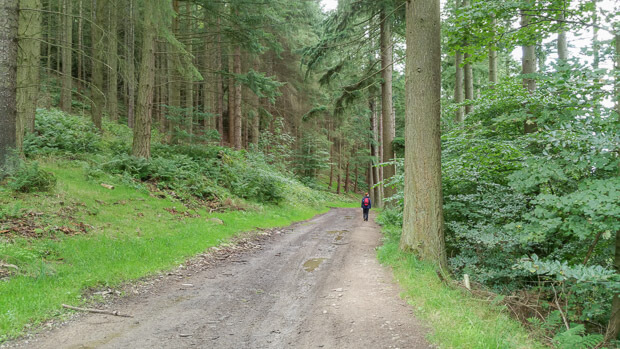 Anyway, we ended up walking through Philiphaugh Estate which is another walk, albeit partly a forest walk and rejoined the main A708 road just as it comes into Selkirk.

I wasn’t so much bothered by the extra 4 miles walk back it was the fact it was on a main road and we had to keep our ears open for traffic and jump into the verge as it came near. There was no path at the side for pedestrians.

A nicer walk over the saddle of the hill would have been had if I’d been paying attention at this point. But hey-ho these things happen and at least we got plenty of exercise and arrived back to our apartment to share a well deserved bottle of….. 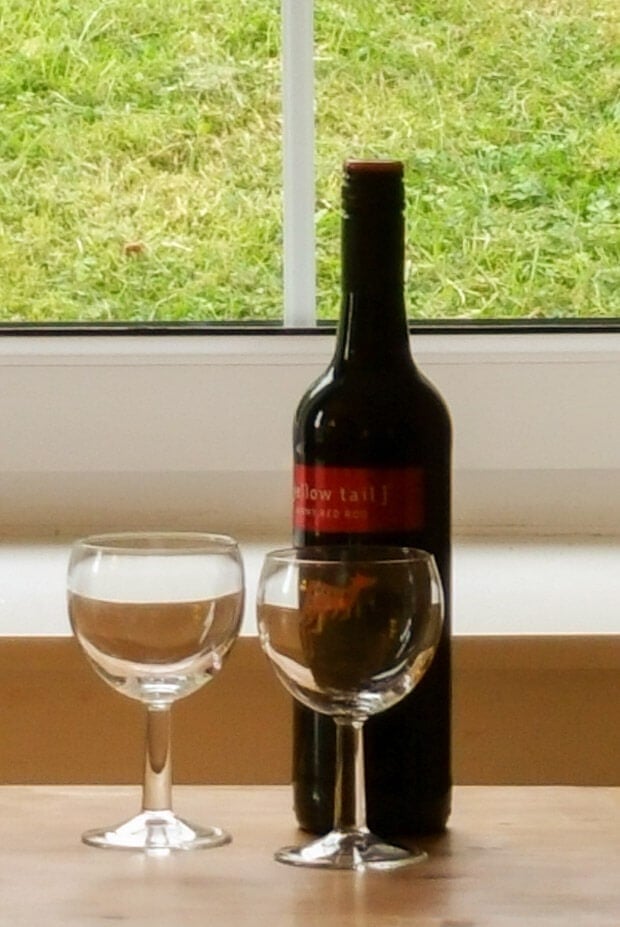 Well folks if you got this far in reading through, or even just scrolling through, then thanks for keeping up! Remember you can check out all our other trips and walks just by clicking on the active lifestyle link.

There will be a new family chicken dinner recipe up on Thursday, another classic budget quick healthy meal!

So, I’ll catch you then and we can get right back on track with some amazing autumn / fall recipes!

In order not to miss future updates and new recipes, make sure you’re subscribed to neilshealthymeals by adding your email* to the subscription list at the very top of this post or subscribe here. And you can follow me too via your favourite social media channels below.