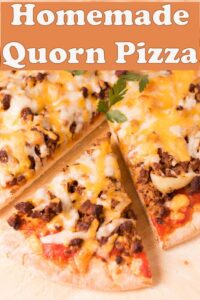 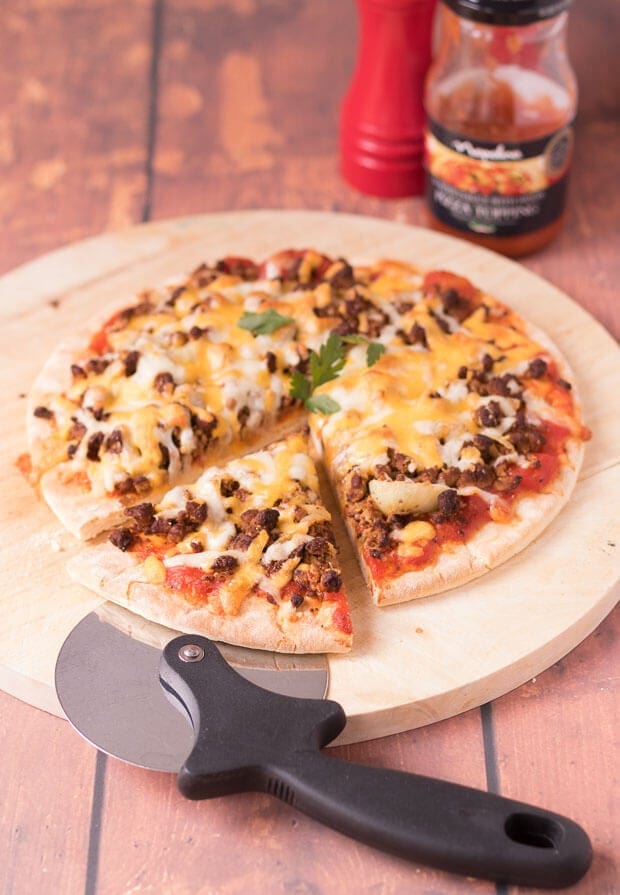 Folks, I was serious in the intro when I said that when eating this vegetarian Quorn pizza you could be mistaken for thinking that it was actually a spicy meat feast one!

You see homemade pizza is one of our weekend treats. Part of our 80/20, that Lady Lynne and I love to enjoy chilling out in front of the TV watching a film or comedy box set together.

We both love a whole combination of toppings and flavours, particularly meat feast.

But, in our efforts to eat less red meat I suggested we just make pizza’s with chicken or vegetable toppings.

That that was fine. However we both knew we’d soon miss our favourite meat feast one.

That was until I decided to substitute Quorn mince for the beef mince and came up with this amazing homemade vegetarian meat feast alternative, Quorn pizza! 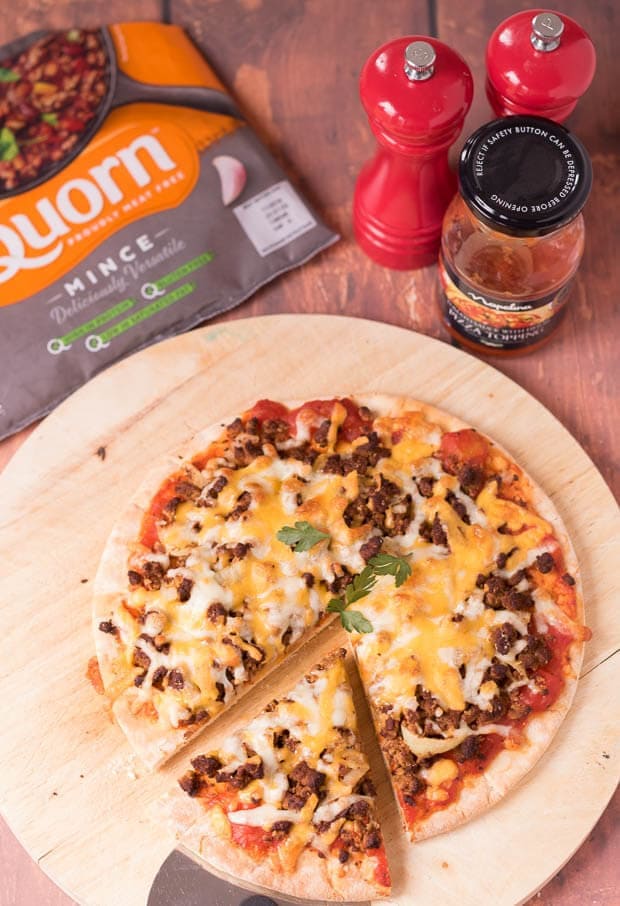 This Quorn pizza is so simple to make too.

It’s from delicious quorn mince with an optional spicy twist and a tasty cheddar cheese and mozzarella melted cheese topping.

The spicy Quorn mince mixture takes only about 15 minutes to cook and forms the topping.

This is then spooned over the tomato sauce covered bases.

Then the two difference kinds of cheeses are sprinkled over the Quorn mince mixture and this is then baked in the oven until the cheese is bubbling and the crust is crispy.

The whole process shouldn’t take any longer then 30 minutes to have these delicious homemade pizza’s served fresh. Taking up just a fraction of your hard earned weekend and TV relaxation time! 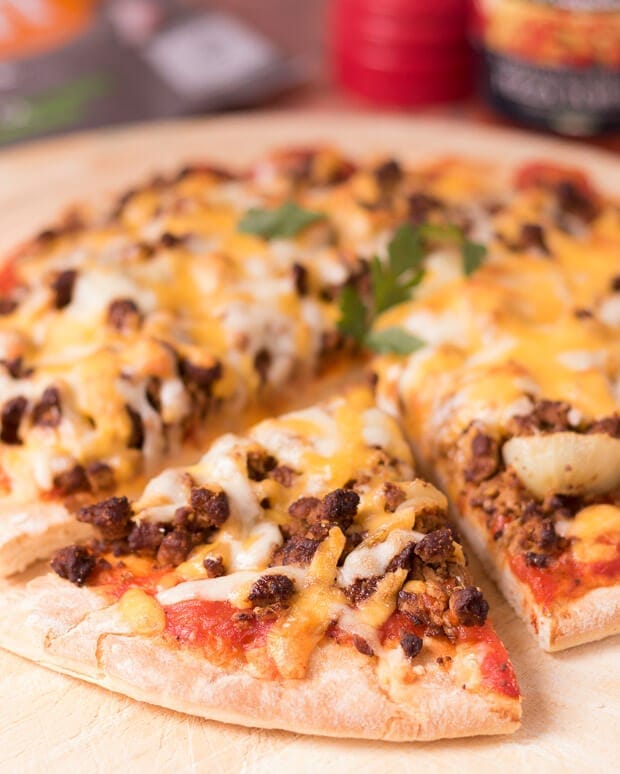 These Quorn pizza’s would be great to have during the week as a quick and healthy family dinner option too.

A light side salad made with lettuce, cherry tomatoes and sliced red onion compliments your pizza perfectly.

In fact there’s a whole combination of side dishes that could go with your pizza, not just a salad but steamed vegetables like broccoli or Roast Summer Vegetables. 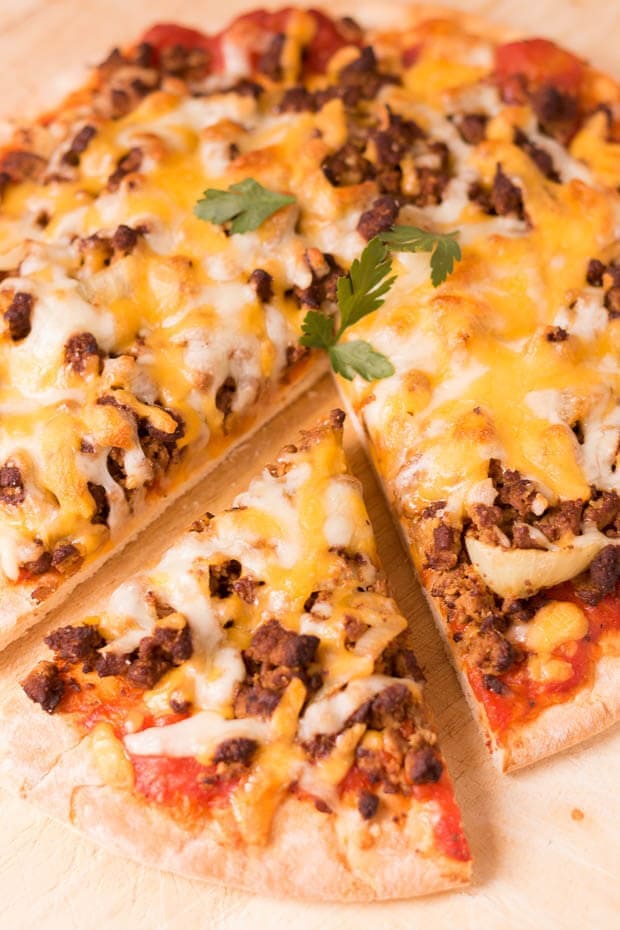 There’s so many other flavour combinations and toppings you could try to add to your Quorn mince pizza.

Just stir these suggested toppings into the Quorn mince after cooking and before you top the pizza with the cheeses and place in the oven!

Other Popular Quorn Mince Recipes For You To Try

Well, Tuesday it’s a one pot Green Lentil and Sweet Potato Stew. That one is guaranteed to fill you up!

Then on Thursday, it’s time for a new bake so how do you fancy a fruity Lemon Blueberry Yogurt Cake?

Have an amazing weekend for now and I hope you’ll catch up with me next week!

I used shop bought pizza bases here in my quorn mince pizza recipe, for convenience and to save time.

However if you want to make your own homemade pizza dough it’s easier than you might think!

It does take a little longer, yes but it’s certainly worth the effort for a 100% homemade pizza!

You could also use flatbreads for thinner tastier and healthier base.

I’d love to hear what you think of my recipe in the comments below and please do rate my recipe if you like it! 🙂 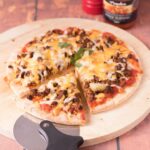 *Chilli powder is optional ** You could make your own pizza dough using the method in my Homemade Pizza recipe. The recipe makes 2 large pizzas. The nutritional label assumes the pizzas are shared amongst 4 people.