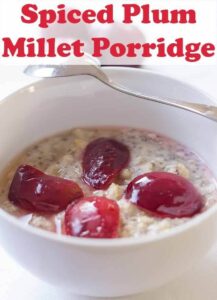 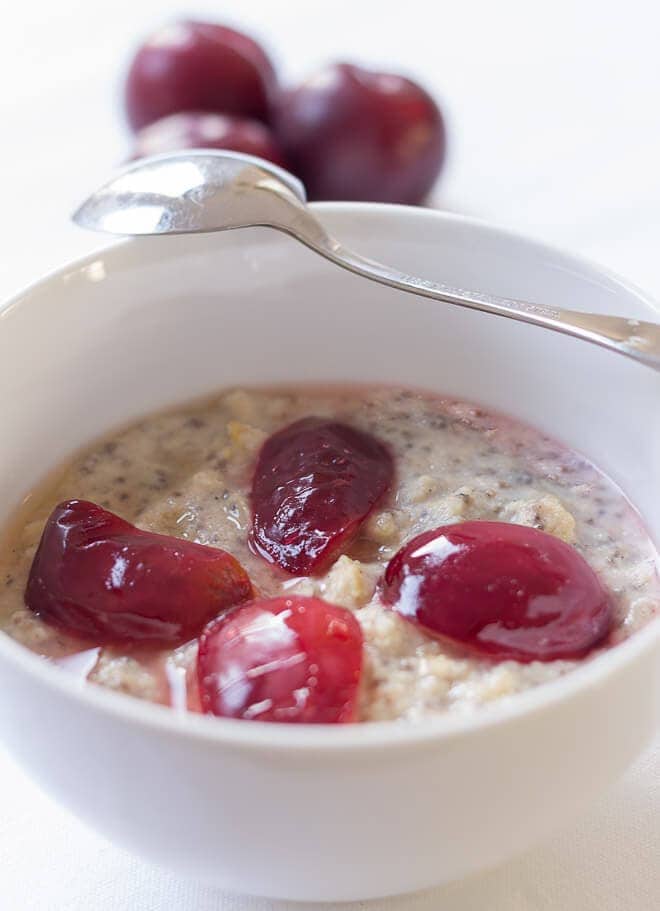 Here’s the second recipe, a spiced plum millet porridge, in my week of different porridge breakfasts for you to try to give 2015 a great healthy start.

Helping to lower type 2 diabetes risk and protecting against cancer are just some of the many published benefits of a wholegrain unprocessed breakfast like this. 🙂

The spice and plum add a healthy natural sweetness. If you haven’t tried millet porridge before you’ll love this!

Where Did The Inspiration For This Millet Porridge Come From?

Whilst on our honeymoon in Kenya in September 2013 I discovered that Millet Porridge was available for breakfast in most of the places we stayed in.

Being someone who likes to try anything, especially porridge related, I instantly headed to the porridge breakfast location each day.

However, I just could not get used to the taste of that dull grey looking concoction which tasted like soil! 😮 That was unusual for me, as someone who likes just about anything.

In hindsight perhaps the overall problem with the Kenyan millet porridge for me was it may have been made from grey millet flakes, rather than the white ones I buy, but I didn’t learn that until recently!

Undefeated and rolling in to 2014 I discovered I could buy millet flakes in Holland and Barrett and thus set out to find a way I could add it to my breakfast porridge repertoire.

After many variations to make this breakfast choice something I would begin to yearn for, I came up with this delicious creamy textured spiced plum millet porridge recipe and BONUS it’s gluten free too! 😀

Spiced plum millet porridge tastes deliciously thick and creamy and it's gluten free too. Wake up those taste buds with this superb alternative porridge breakfast.Click to Tweet

Feel free to add a little more honey here to this spiced plum millet porrisge if you find the taste a little too sharp for your liking or maybe a natural sweetener like stevia.

Cooking Millet Porridge On Your Stove:-

Cooking Millet Porridge In Your Microwave:-

The millet flakes and chia seeds can be soaked overnight in the milk. If you find the porridge is not creamy enough then stir in 1 – 2 tbsp. fat free yogurt of choice.