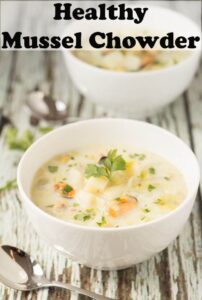 Healthy mussel chowder is a creamy delicious seafood chowder made without butter or cream. This thick and chunky seafood soup is one amazing budget quick healthy meal. 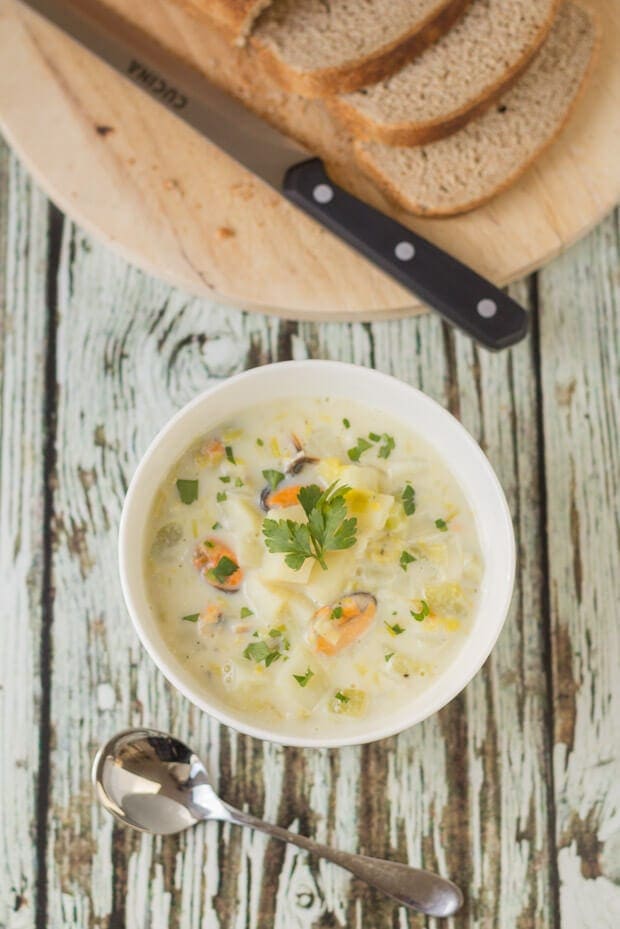 Folks, this healthy mussel chowder may be made without butter or cream but in no way does that mean there’s any loss in flavour or texture.

It’s still as deliciously creamy as the original classic recipe but its made with milk instead.

I was recently challenged by Rick Stein to make this.

No, seriously folks, He really did challenge me, stay with me here and let me explain…..

In his new series “The Road To Mexico” whilst making a Clam Chowder, he said “if you haven’t got clams then use mussels instead!”

So there you have it, the challenge was thrown down to me. Make a mussel chowder.

Plus, I don’t know about you but its much easier for me to get mussels in a supermarket as opposed to clams! 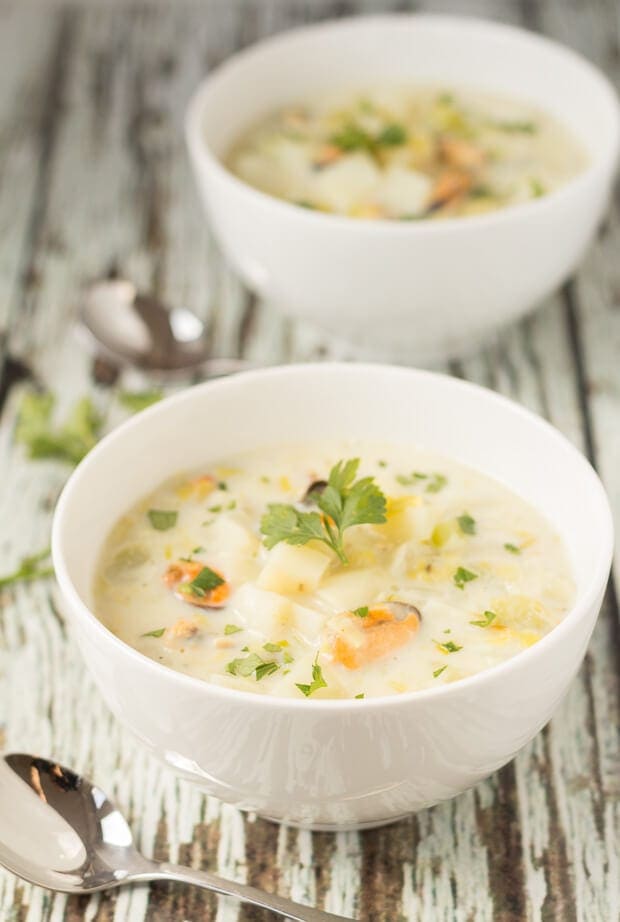 Now obviously I’ve not used his Clam Chowder recipe directly as that would be plagiarism.

Indeed his recipe, being a version of the classic original contains butter and cream. So as you can see in my recipe below I’ve not used those ingredients.

Instead with my mussel chowder I concentrated on getting the maximum amount of flavour out of the bare minimum of ingredients and just milk. So that this recipe stays as close as possible to the original New England clam chowder.

Mussels are said to be at their best between October to March so if you can get fresh mussels and in particular between those times of the year then that’s a bonus.

If you can’t get fresh mussels but can get pre-cooked ones, those kind already taken out of the shell, I’ve adapted my recipe to include those being used instead. They’re often cheaper too, hence the budget recipe reference.

So, this easy healthy mussel chowder recipe is perfect to make all year round! 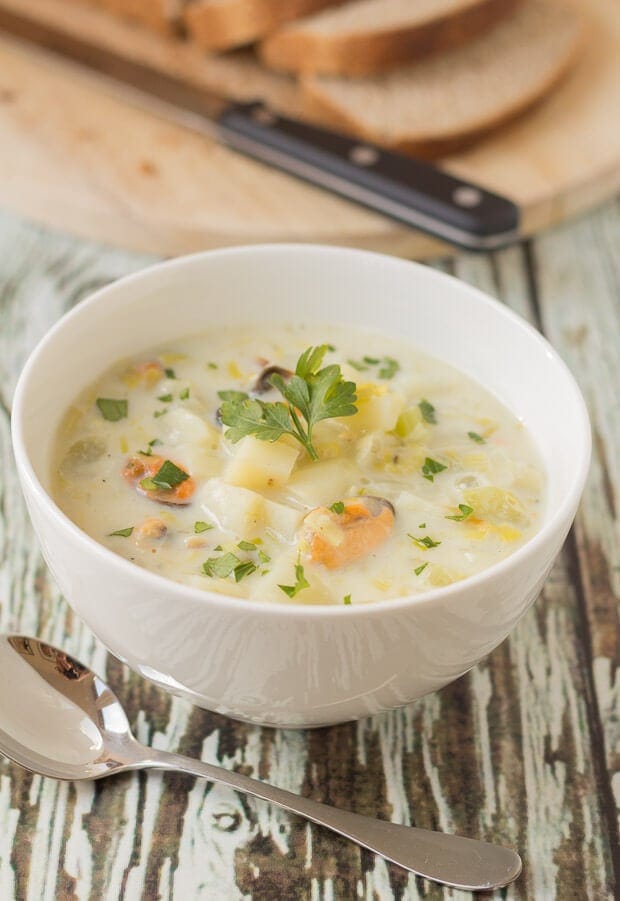 How To Make This Creamless Healthy Mussel Chowder

As I mentioned above you can either use fresh mussels or pre-cooked mussels for this mussel chowder.

If you can get fresh mussels it’s so worth that little extra bit of effort in having to steam them and then removing them from their shells. That also adds a bit more originality and authenticity to the recipe!

Some chowder recipes also use bacon to add an extra bit of sweetness and flavour but here its the onion, celery and leek that provide that and then the use of the bay leaf provides an excellent slightly delicate floral flavour too.

The corn flour and cold water are mixed together to form a paste and when added thicken the chowder and give it body. This means there is no need to add cream.

Make sure to mix the corn flour and water together in a little bowl first before adding to prevent the chowder from clumping.

If you loved this (which I’m pretty sure you will 🙂 ) make sure you try out the Moules Marinieres recipe next. Again I’ve “lightened” that classic original up there by not using any cream either!

So folks, what have I got install for you to look forward to next week?

Well, I recently “acquired” a slow cooker, yes I know I’m miles behind the rest of the world and you have one, but mine was free!

So I’ll be bringing out my first Neil’s Healthy Meals Slow Cooker Sweet Potato and Vegetable Curry recipe on Tuesday.

For Thursday, I thought we were way overdue a nice bake. So I’ve a new salmon and spinach potato bake so stand by for that!

Until then, have a great weekend!

This mussel chowder recipe is not only healthy but it’s decadent and filling.

It could be an ideal starter for a dinner party to impress your guests! 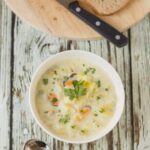