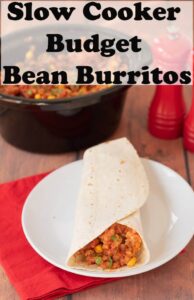 Slow cooker budget bean burritos are the perfect recipe for feeding the family and letting you get on with other things in the meantime! 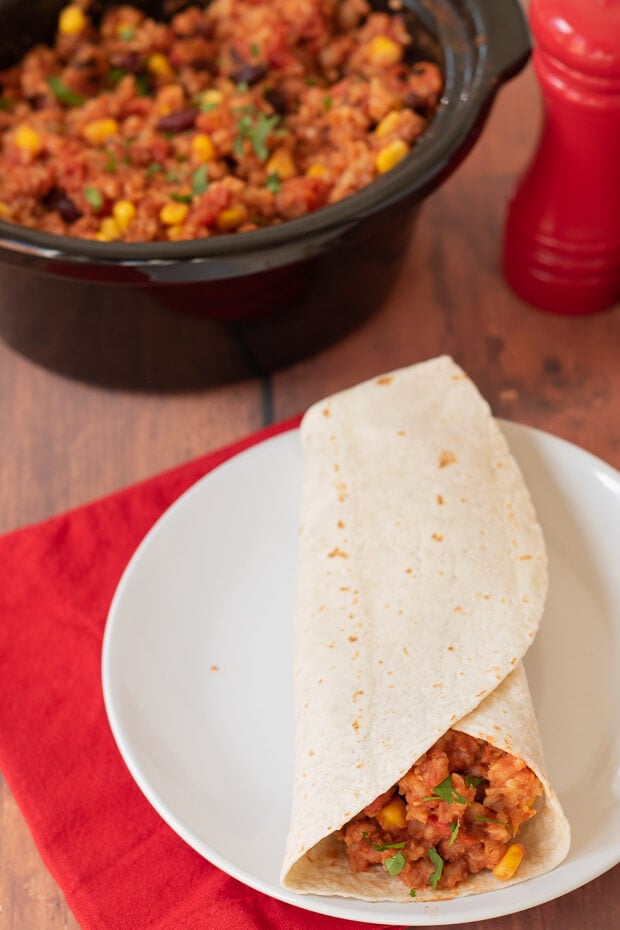 Folks, I know I always start off my recipe post by telling you just how much I think you’ll love that particular recipe, but today’s slow cooker budget bean burritos really are something else!

You see not only is this a wonderfully easy and filling family recipe but it doesn’t break the bank either.

These burritos are delicious and full of flavor.

Just add all the ingredients into your slow cooker and let it simmer away resulting in a cheap and easy healthy, vegan meal! 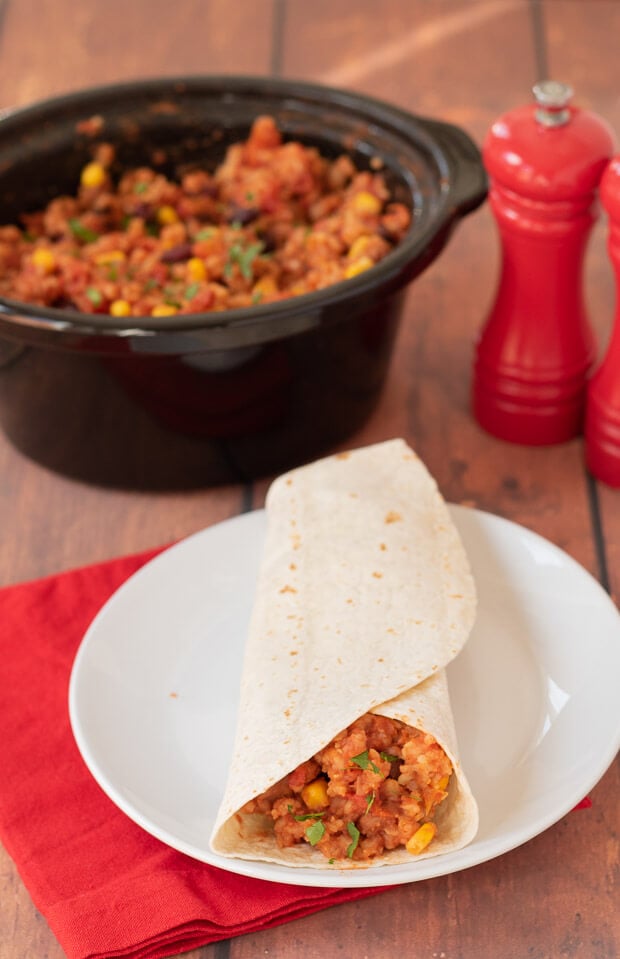 Here, instead of chicken or steak which is what American burritos normally consist of, I’ve opted to use the more simple, traditional Mexican burritos filling made of beans thus saving us all some pennies.

Actually to be honest Mexican burritos do often contain beans (mainly refried beans) and some meat, but when you make and taste these meat free vegan burritos I think you’ll agree that we don’t need meat to make a perfect Mexican burritos recipe.

I’ve used the minimum amount of ingredients in this slow cooker budget bean burritos recipe. Just enough so that it still maintains its authentic Mexican flavour but also to make sure that as per the title, it’s still a “budget” recipe!

Rather than several different kinds of tins of beans I’ve used a tin of Mexican style mixed beans which my local supermarket just so conveniently happened to start stocking as a NEW product.

In fact that was what originally give me the idea for this budget recipe. If you can’t get a similar tin of Mexican style mixed beans, any other beans like black beans will do.

What I was also trying to figure out recipe wise was what we could have simmering away in my slow cooker whilst we were out and about hiking the hills of the Scottish Southern Uplands.

Which we did back at the end of February when we stayed once again at Broadmeadows House. 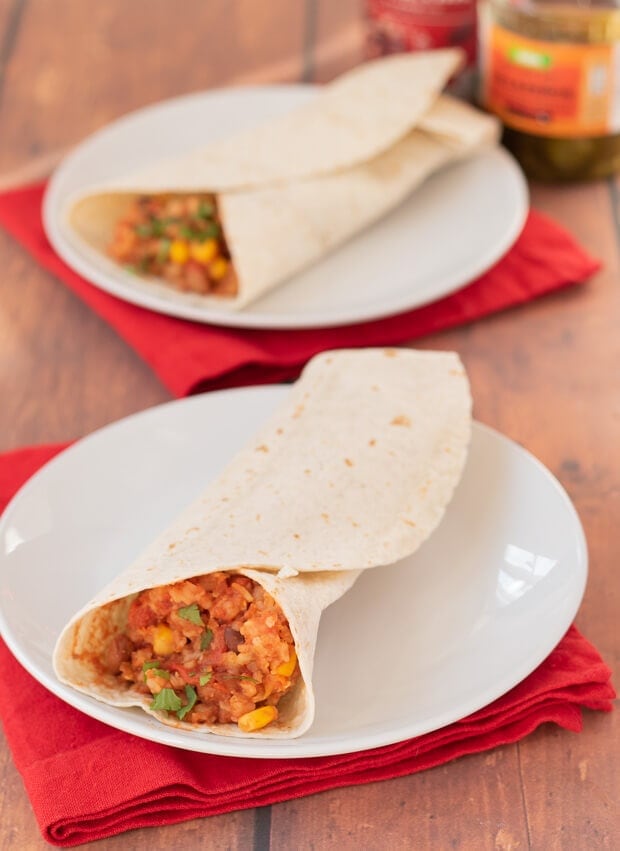 It was a cold day in the hills (about -4°C) but it was also a clear crisp and bright day.

There was a beautiful clear blue sky above.

We walked about 7 miles in total and saw spectacular sights, like this old ruin, Newark Castle. 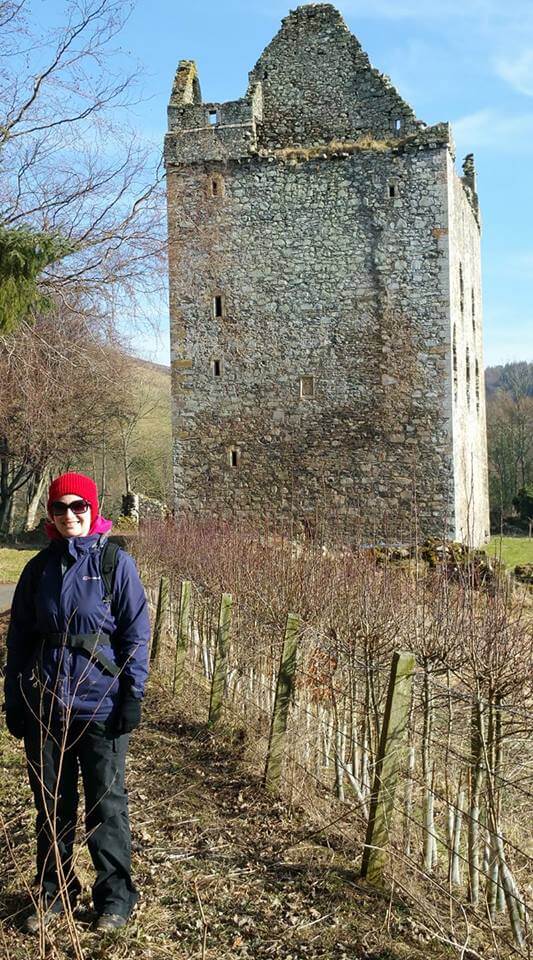 On our return to our accommodation in Broadmeadows House we were greeted with the amazing aroma coming from this slow cooker budget bean burrito bubbling away happily in the cooker.

These went down well and I recommend to anyone.

If you don’t have a slow cooker then you might want to think about purchasing one (details below!).

For this Slow Cooker Budget Bean Burritos Recipe you may need….

The following links and any links in the recipe card below are affiliate links.

That means that if you click on it and then buy that product I’ll get a small commission (at no extra cost to you of course).

If you do click through then thanks for being a part of Neil’s Healthy Meals!

This is the slow cooker I use.

As you can see it’s relatively inexpensive and its perfect for meals of up to 4 people!

OK so what’s being dished up next week?

The curry on Thursday is an Easy Chicken Sharabi Curry which I learnt to make at an Indian cookery class I attended. I just tweaked it to be much more healthy, and easier to make.

Hope you can join me then. In the meantime have an amazing weekend!

Slow cooker budget bean burritos are the perfect recipe for feeding the family and letting you get on with other things in the meantime!Click to Tweet

Using your slow cooker to make these delicious bean burritos you’ll be able to get on with other things whilst they’re bubbling away in the background.

Not only that they’re freezer friendly too. 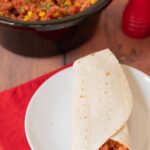 *If not available you could use Black Beans or equivalent