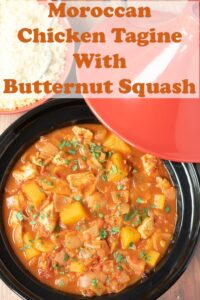 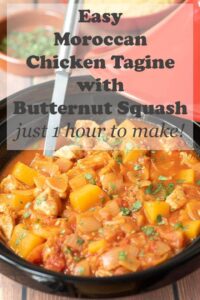 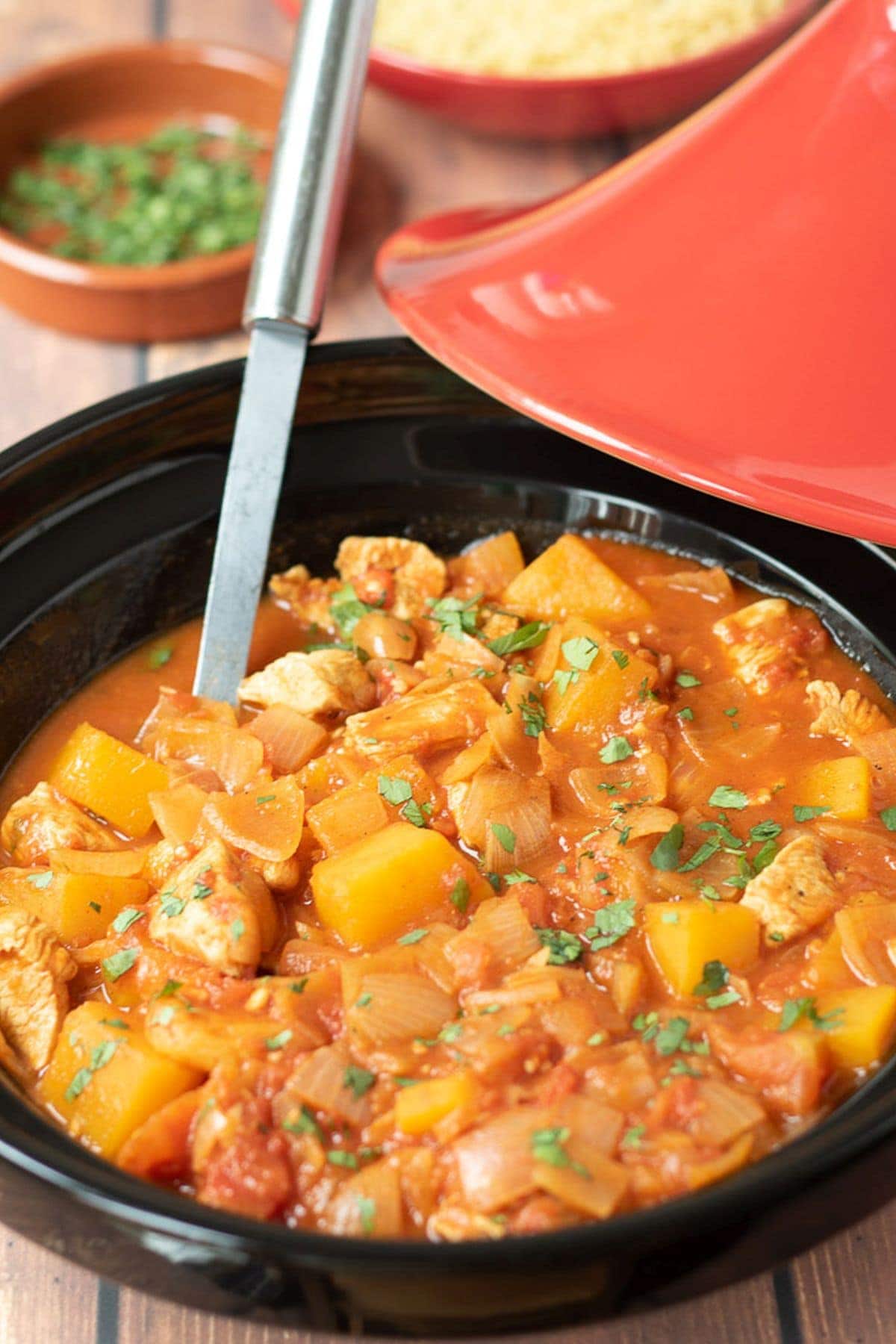 Secondly I really want you to experience the flavours of Morocco. Flavours that I’m lucky enough to have had first hand experience of.

I’ve briefly told the story before in my other Moroccan tagine recipes, the spicy Moroccan chickpea tagine and Moroccan Beef tagine of my travels in Morocco.

I talked about my love of the fusion of Moroccan flavours and in particular those that come from a tagine recipe.

This easy Moroccan chicken tagine will let you experience all those flavours yourself. Without too much effort! 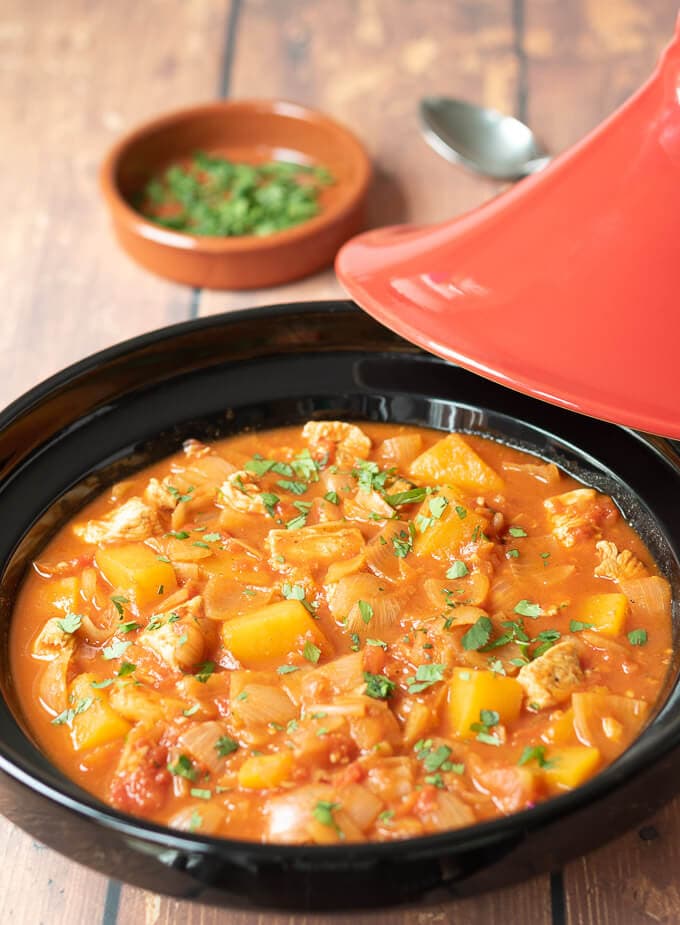 Before I go any further let me just say that you do not need a tagine dish to make this recipe.

You can make this easy Moroccan chicken tagine in a stove top proof casserole dish or large pot.

That’s one of the reasons why I’ve called this an “easy” recipe.

The other reason is that it only takes an hour to make.

Otherwise if we were making this Moroccan chicken tagine in the traditional way we would be heating a tagine over lumps of charcoal and cooking it slowly for several hours!

No, we are using a stove to cook this one!

However, rest assured you will experience a delicious combination of traditional Moroccan flavours from this chicken and butternut squash recipe.

As well as some amazing sweet smells of honey and cinnamon permeating your kitchen whilst it’s cooking.

This Moroccan tagine recipe is made with tender and succulent chicken. The spices, apricots and honey provide the contrasting sweet and savory flavour combinations.

Butternut squash absorbs all of the flavours of the dish and is an excellent source of vitamin A.

Soon you and your family will be feasting on this delicious, fragrant and healthy Moroccan chicken tagine. 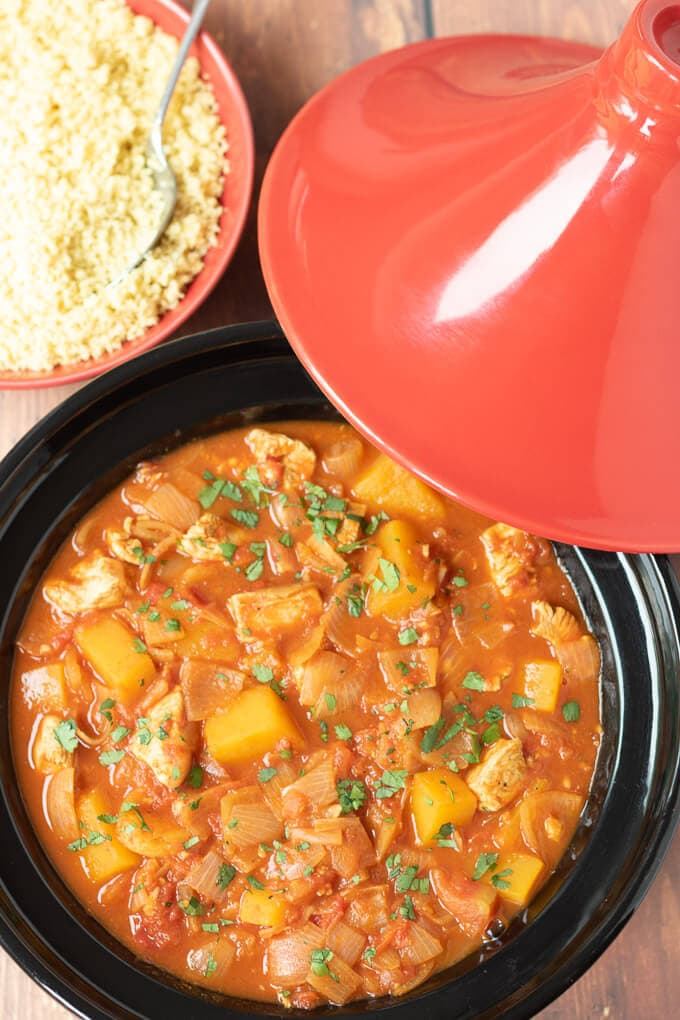 Moroccan food is generally healthy. Moroccans are healthy people because they eat a lot more vegetables than meat. A typical Mediterranean diet.

Not only does Moroccan food like this Moroccan chicken tagine incorporate lot’s of vegetables but it also often contains dried fruits. Just like how this chicken tagine recipe has dried apricots added to it.

The sweetness of the dried apricots compliment the spices. They also add important vitamins and minerals to the Moroccan diet.

Moroccans use a lot of spices in their cooking. This doesn’t just make their food burst with flavour. Spices have many health benefits too. For example cumin is excellent for digestion. 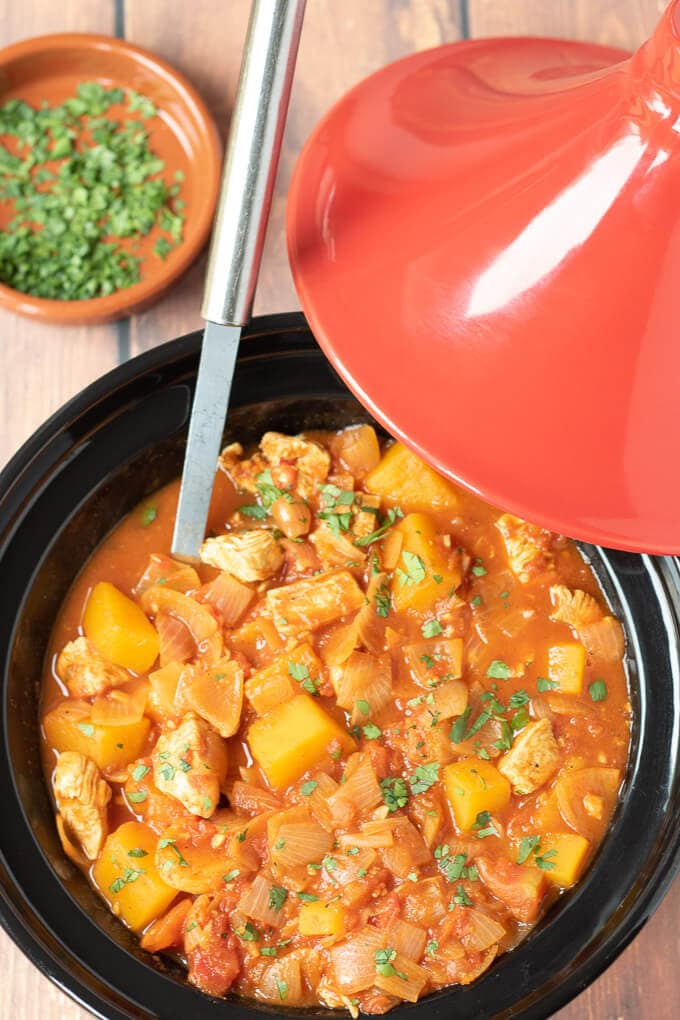 What Spices Are Used In a Moroccan Chicken Tagine?

Moroccan cuisine is an amazing fusion of flavours and dishes from the regions that it traded with over the centuries.

The main regions of influence include the Arabic, Andalusian and Meditarranean regions with some European influence too.

Spices are used extensively in Moroccan food. Particularly in tagines. Many of the spices that are used in Moroccan tagine dishes are home grown but again many of the regions that influenced Moroccan culture also contributed their own spices to Moroccan cooking.

Some of the main spices that are used in Tagine cooking I’ve used in this easy Moroccan chicken tagine recipe :-

However, there are an amazing twenty seven spices combined to make one of the most famous Moroccan spice mixtures, ras el hanout!

Ever wanted to make a Moroccan tagine but don't know where to start? Well start here with this easy chicken tagine. You don't even need a tagine dish to make it!Click to Tweet

To accompany this chicken tagine recipe, if you don’t have any couscous to hand you could serve this with basmati rice instead.

You can freeze any leftovers of this chicken tagine too. 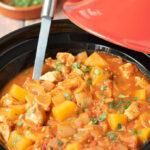 The following links and any links in the recipe card below are affiliate links.

This means that if you click on it and then buy that product I’ll get a small commission (at no extra cost to you of course).

If you do click through then thanks for being a part of Neil’s Healthy Meals! 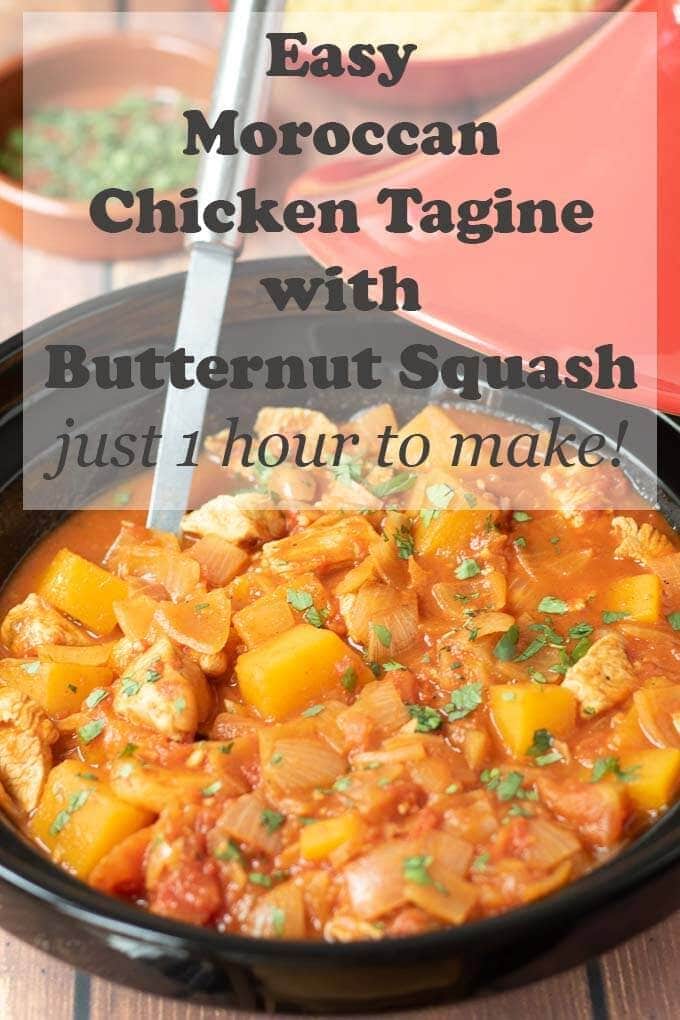